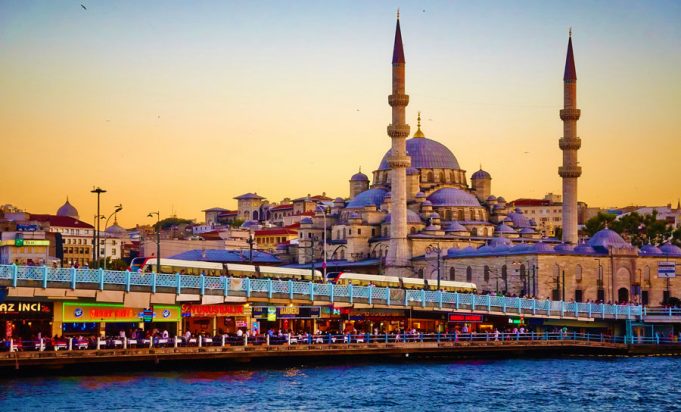 The list of historical places in Istanbul is home to a bridge between the two continents, the meeting point of western and eastern cultures, and the legacy of all humanity’s priceless Istanbul historical monuments. The place of the city is so enormous that human settlements developed here long before the beginning of our age. The ancient Byzantium, Constantinople and the majestic splendor of Istanbul, is among the places to visit in Turkey.

Istanbul There is many artifacts between historical places and tourist places. Istanbul is waiting for you in the center of the world for centuries. In Istanbul, a tourist can see the treasures of two cultures; Byzantine and Ottoman. The unique Hagia Sophia competes with the beauty of the Blue Mosque. The secrets of the century in the Topkapı Palace are securely hiding behind the strong walls and the bazaars in the east add color to the busy streets.

This unique Istanbul historical monument is a masterpiece of Byzantine architecture. It is the symbol of the most brilliant moments of Christianity and the witness of the death of the Byzantine Empire. The Cathedral was laid during the reign of Emperor Justinianus in the 6th century AD. For 14 centuries, it was subjected to destruction several times. After the conquest of Constantinople, the temple destroyed many Christian values ​​and was turned into a mosque. At the beginning of the 20th century, the Turkish authorities decided to assign the status of the museum to Hagia Sophia.

Hagia Sophia, which should be on your list of historical places to visit, has been the coronation center of the Eastern Roman Empire. Hagia Sophia, meaning Holy Wisdom, was built 3 times. It was named after the 3rd year when it was built. This museum, which is still considered to be a wonderful architecture even today, is flocking to local and foreign tourists every year. We see that even movies are the subject. Hagia Sophia, Istanbul has an important place in historical places.

He is one of the chief works of architect Sinan who became the symbol of the power of the Ottoman Empire. After the construction of the mosque, which is one of the historical places of Istanbul, the master predicted that this mosque will wait forever. The prophecy must be true that the building survived a few dozen earthquakes for four centuries and survived. Suleymaniye Mosque is the largest mosque in Istanbul. Suleymaniye Mosque is the largest mosque in Istanbul. It is a complex of madrasahs, baths, libraries, observatories and places of worship.

This mosque, which was enchanted by the magnificence of Mimar Sinan’s journey of my work, was built during the reign of the Ottoman Empire. The mosque, which is like a part of Istanbul, is a huge structure with a 53-meter dome and a diameter of 27 meters. Architect Sinan built 32 windows for the best possible illumination of the mosque. Among the places to visit in Istanbul, the mosque is one of the sine qua non of Istanbul trips.

VII. Century a small Greek settlement was established in the Bosphorus. Over time, Byzantine and later became the city of Constantinople. Haliç Bay has been named after the animal horn and the shape of the coastal landscapes. In the writings of ancient Greek scholars, the name Boy Byzantine Horn Antik is also included. In the past centuries, the bay was considered one of the most important strategic and historical places. The estuary can be expressed as the expansion of the rivers due to sea tides.

Haliç Bay separates Istanbul and Beyoğlu. Among the attractions to be visited in Istanbul are the Gulf, 8 km from the Northwest-Southeast. The depth varies between 40 and 60 meters. The gulf, which has been used for every civilization throughout history, has benefited a lot in terms of security. The Byzantines were protected from enemy ships thanks to the chain between Sarayburnu and Galata. Lastly, Fatih Sultan Mehmet entered the Golden Horn by running the ships from the land. You should add Haliç Bay which is one of the historical places of Istanbul to your guide.

Bosphorus, Turkey’s maritime border between Asian and European parts, often called “the spirit of Istanbul” is called. Along the Bosphorus, there are magnificent sultan palaces, castles and historical artifacts along the coast. Istanbul cannot be imagined without the Bosphorus. This narrow water strip was once the main subject of the disputes in the military conflicts with the states.

The Bosphorus, which is one of the things to do in Istanbul, was completed in a period of 39 months. The Bosphorus Bridge connects Beylerbeyi and Ortaköy. Also, as the 21st Great Bridge of the world, it has been named as one of the historical places to visit in Istanbul. Its length is a huge bridge of 1500 meters. Today, the name is changed as 15 July Martyrs Bridge. The bridge built in 1973 crowned the 50th Anniversary of the Republic on 29 October.

The prototype of the modern stone tower, nowadays one of Turkey’s most beautiful places. built by Emperor Justinianus VI. The wood of the century was a Byzantine structure. After the Byzantine conquest of the Byzantine in the 15th century, the tower was used as a lighthouse, a fire station and a prison. Since the building is located on a hill, it can be seen clearly from the streets of Istanbul. You will be amazed by the ancient architecture of the city, which can be watched from the tower’s observation platform.

Among the historical places to visit Istanbul, Galata Tower has a height of 70 meters. The tower has been used for different works every period. Sometimes the watchtower is sometimes used as a place for workers to stay, sometimes for the news of midnight. There is also the legend of the Galata Tower. According to the legend, the tower was built in front of Kız Kalesi. Since then, the lovers who come here will get married.

Yerebatan Sarnıcı, which has an important position among the historical places of Turkey, has been the focus of attention of tourists. This place is famous for its marble columns that run through the water. The cistern is a huge structure, 170 meters long and 70 meters wide. The cistern is accessed by a 52-step ladder. It also has the capacity to store thousands of tons of water.

Yerebatan Sarnıcı is a building that has provided water to many people during the Byzantine period. It was used to give water to the garden of Topkapı Palace with the conquest of the Ottoman Empire. Until the 16th century, the West was not aware of this cistern and was introduced to the world by a Dutch traveler in 1550. It has even been the subject of films. According to the research of this traveler, it was learned from the wells here that people took water from the bucket, fishing.

The Maiden’s Tower is one of the most valuable places in Istanbul and one of the highest destinations of the Bosphorus. One of the most important historical places in terms of architectural, cultural and touristic places of Istanbul is the tower which was mentioned for the first time in 410 BC. This tower, which is 18 meters high and can be chosen from a distance, was built on a small island. Although it has been damaged many times in history, it is still one of the best holiday destinations. Today’s II. Mahmut is in time. According to the research, the purpose of the tower is to control the ship passes and to receive taxes from them.

It was used for defense purposes during the Roman period. Although it was used for defensive purposes in the Ottoman Empire, it was mostly the scene of Mehter team demonstrations. The Maiden’s Tower, which can be visited until today in Istanbul, has been extensively repaired in 2000. Upon completion of the repairs, it started to welcome its visitors as a museum and restaurant. It has also been successful that everyone who comes to Istanbul does not go without visiting this tower. The entrance fee for the tower is quite inexpensive, and the entrance time is open for visits up to 19.00, 365 days a year.